The resignation of B. Randolph of his office of Trustee of Austin College was received and accepted. Rev. R. E. Sherrill was elected to serve in the place of B. Randolph resigned, until the meeting of the Synod of Texas.

Communications from Denison and Sherman relative to location of the college were read and the following resolution was adopted: Resolved that the Board of Trustees adjourn to Sherman on Feb’y 9, and that Rev. S. M. Luckett be authorized at his discretion to inform the committee of subscribers that the offer of the citizens of Sherman will be accepted and the College located at that point--provided that an amount equal to that withdrawn from the original subscription be secured by the 9th instant. 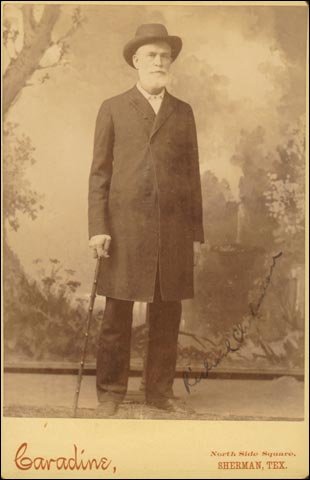 After looking round at building sites, canvassing validity of subscriptions and contract to be entered into--the following preamble and resolutions were unanimously adopted: Whereas for some time passed we have been looking for a better location for Austin College, than the present one at Huntsville, Texas; and whereas, we regard Sherman, Texas, as an exceedingly suitable and desirable place for the College; and whereas the citizens of Sherman and vicinity have offered us very liberal aid in securing a good building site and erecting new buildings for the use of the College, therefore Resolved, that we accept the offer made us by the citizens of Sherman and tender to them our hearty thanks for the same. Resolved, that Rev. R. E. Sherrill, E. P. Gregg, and F. M. Goode, be and they are hereby appointed a committee to act in concert with C. C. Binkley, R. A. Chapman, and F. W. Sumner to secure deeds to the land, subscribed and collect subscriptions to secure an architect, get a plan and specifications for a college building and have it erected in accordance with our contract with the citizens of Sherman and others.

[[R. A. Chapman: membersof the local committee to bring Austin College to Sherman.]]

Resolved that the Rev. S. M. Luckett, F. M. Goode, C. C. Binkley, and D. MacGregor be and are hereby appointed a Committee to select a building site for Austin College within the limits of the City of Sherman, with the understanding that any member of this committee who may be absent from any meeting may vote by proxy. 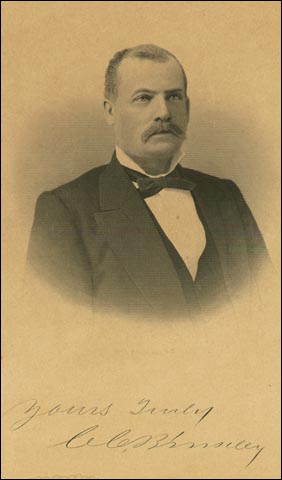 Resolved that Rev. R. E. Sherrill be and is hereby appointed local financial agent for Austin College to secure additional donations to the College in Grayson County and the surrounding counties; the compensation to be allowed Mr. Sherrill is to be determined by the Trustees from time to time as he reports to them what he has done and his agency to cease when either he or they desire it. 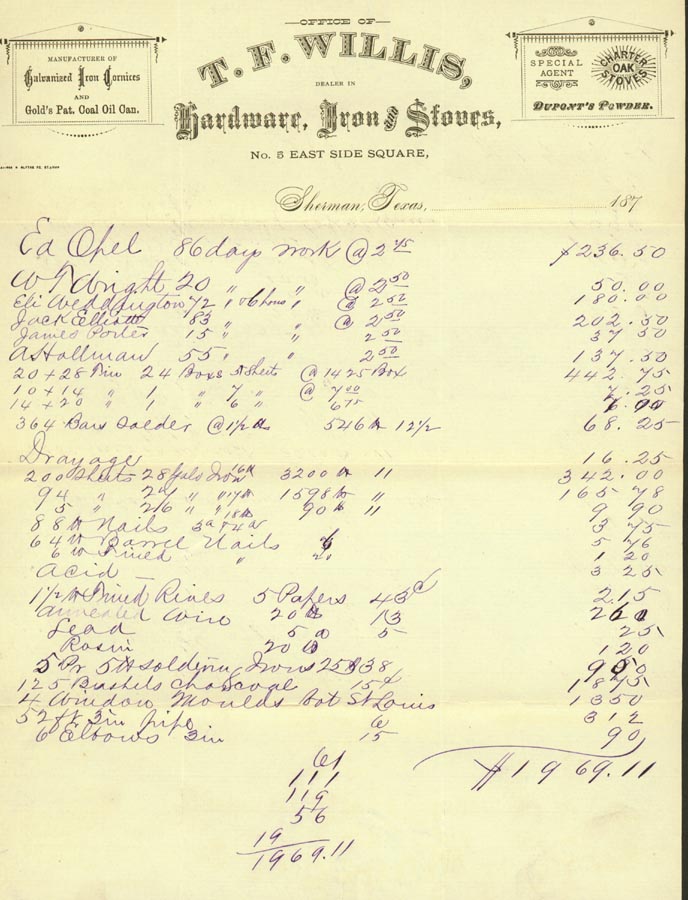 The buildings at Sherman have been commenced but are likely to advance very slowly unless funds can be raised outside of the Sherman subscription.

If the trustees could furnish six or eight thousand dollars to be spent in the building this summer, in addition to what can be collected at Sherman and vicinity--it would insure the completion of the new building so far as to open by the 1st Monday in September. Otherwise I do not know when we can open there.

[[Statement for materials and work done in connection with the Austin College building. Thompson F. Willis’ business was located on South Travis Street between Houston and Lamar streets. His residence was only a few blocks away on South Travis between Cherry and King streets.]]

Business resumed. The committee to whom was referred the President’s Report made the following report:

Recommend . . . That the Pres’t be requested to continue his efforts to realize money by the sale of land in order to pay the other claims mentioned in his report.

That the Pres’t. be directed to carry out the contract with the subscribers of Sherman, but that the Trustees do not see their way clear to go beyond the terms of that contract.

[[Fred W. Sumner, Sherman businessman on the local building committee, made good on his subscription with the deed to eighty acres of land.]]

Your agreement with the Sherman subscribers requires you to push forward the new buildings as fast as money can be realized from the subscriptions; and to secure a competent faculty and open college exercises in Sherman by 1st of next Dec.

The following communication was laid before the Board, to wit:

Dear Sir: In your report to Synod you stated that you held about four thousand dollars worth of good notes, bearing ten per cent interest per annum. Might not a loan be effected with these notes as collateral that would enable us to go on with the work on the college building? Could not some of the lands be sold and in that way raise some cash? This we think would enable the buildings to go on, and in that way restore the confidence of the people of Sherman and there is little doubt in our minds but that a sufficient amount can be collected from the sale of the lands subscribed and the moneyed subscription to meet any obligation that might be made to effect the loan. Say in six or twelve months at the outside. We respectfully ask that you submit these suggestions to the executive committee.

[[Statement of materials and labor furnished by J. P. Reilly, contractor for the college building in Sherman. Joseph Reilly was a brickmaker who worked for the Houston & Texas Central Railroad and lived south of town.]] 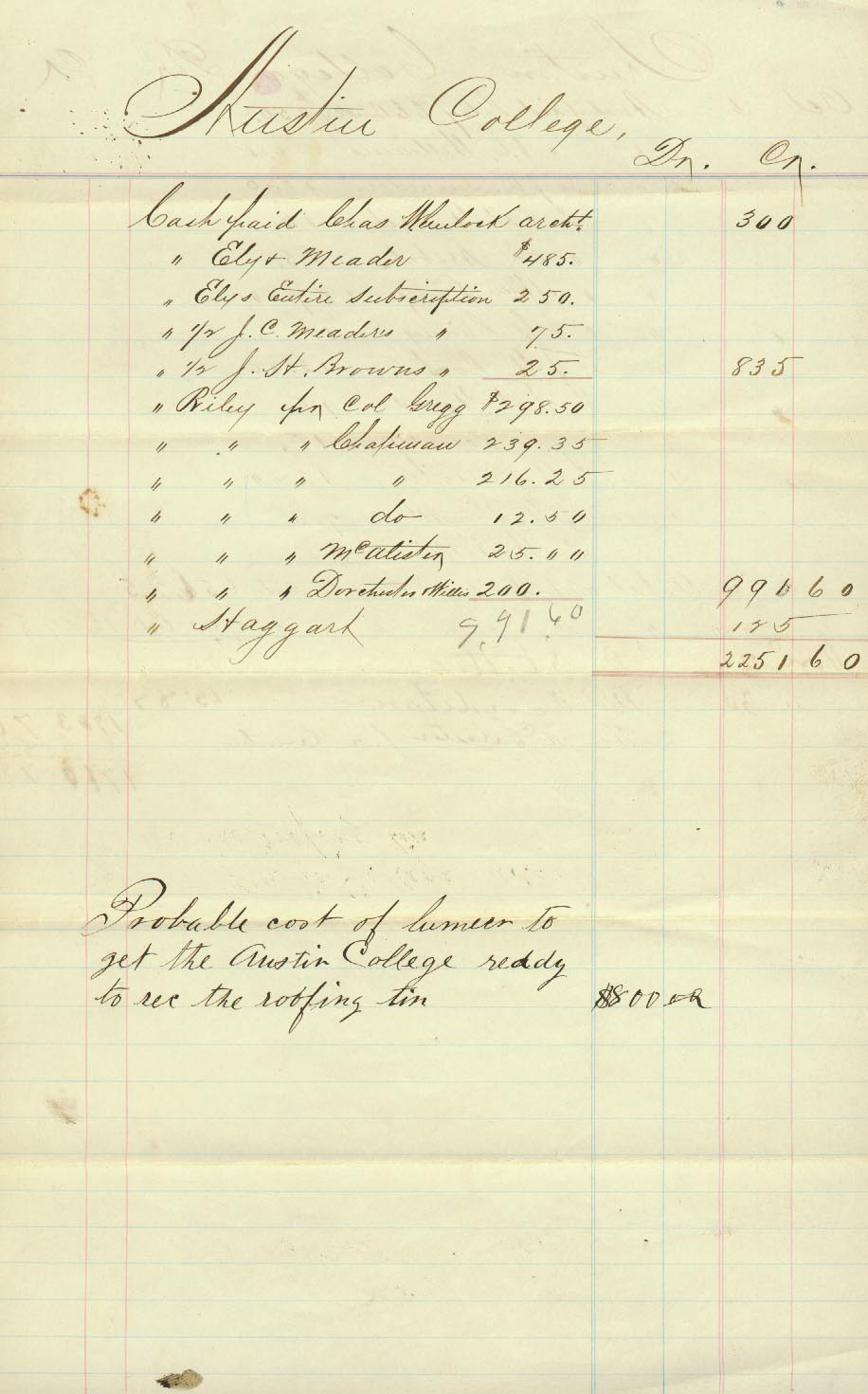 The following resolution was adopted to wit:

"Where as we are requested by some of the building committee to furnish $4000 to aid in erecting the Austin College Building which they have undertaken at Sherman: Resolved that we do not see our way clear to do so since that amount of money if furnished by us would not put the building in a condition to be used for college purposes."

The official date of the removal of Austin College from Huntsville to Sherman was Feb. 10, 1876.