The meeting was opened with prayer by the President who stated that the object of the meeting was to present the following communication:

Resolutions by the citizens building committee:

Whereas many of the subscribers have failed to pay their subscriptions for the erection of the building for Austin College, while some have removed from the county, others became insolvent, and unless the Trustees feel that they can make some advancement toward the erection of the said building the committee are satisfied they cannot raise sufficient funds from the present subscriptions without endless litigation and even then it is doubtful--In view of the premises the committee respectfully suggest that in their opinion it is advisable for said trustees to take such steps as to them may seem right and proper to have said subscriptions revert to the citizens of Sherman in accordance with the provision of the contract between said Trustees and said citizens of Sherman and that Dr. Luckett be requested to submit their suggestions to said trustees and request their action on the same.

The following minute was then passed by the board:

Whereas the building committee at Sherman have suggested to this Board that it will be out of their power to collect $16,000 out of the $32,000 subscribed at Sherman for building purposes (besides the ten acres given for building site:) and have also suggested that the Trustees either furnish money to help finish the $16,000 contract or withdraw from Sherman, therefore resolved

That the president is hereby directed to ascertain from the building committee how much money we will have to furnish in order to finish the building they have begun. 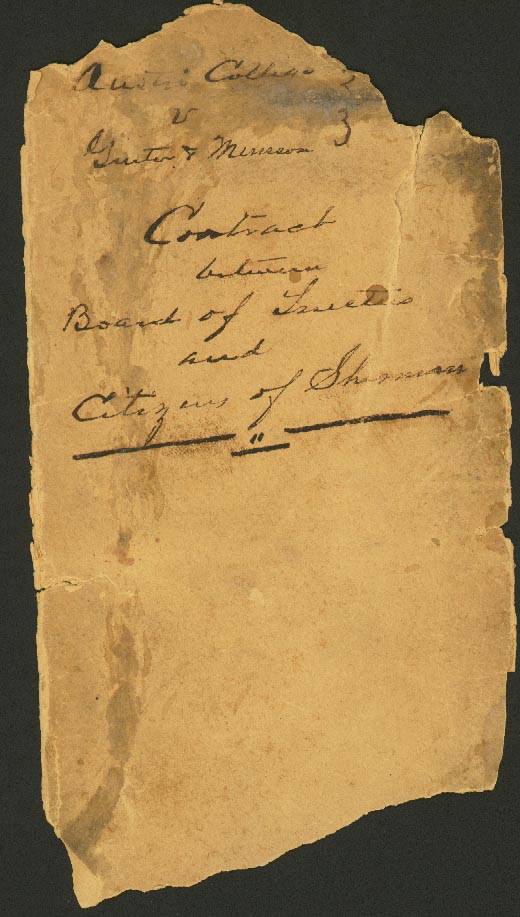 Nothing has been done on the new college building since your last annual meeting--owing to the fact that some of the leading subscribers refused to pay and had to be sued: and many others waited to see what would be the result before they would pay. The plea on their part was that we had not complied with all the terms of the contract; but during this trial we showed that we had done so in every particular. The judgments have been given against them and the attorney thinks we will not have any further trouble with suits, and that enough can in a few months be realized from the Sherman subscriptions to get the new building ready for use.

There are several points that are anxious to become the location of the college and some of these would give very liberally but if we can get enough from the Sherman subscription to keep the new building in a condition to be used, I think we should stay at Sherman.

[[Fragment of envelope containing the contract that was the primary exhibit in the case of Austin College v. Gunter & Munson, a lawsuit over the Sherman subscriptions.]]

Report to the Synod of Texas

We the Trustees report that from the 2nd day of Oct. 1876 to 15th day of June 1877, College exercises were conducted at Sherman in the Odd Fellows Hall. Prof. J. E. Wharton, a fine scholar & an experienced educator was in charge: forty-five students were enrolled . . .

[[Capt. J. E. Wharton taught classes in the Odd Fellows Hall prior to the opening of the college building in Sherman.]]