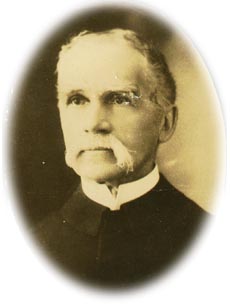 After offering the presidency of the college unsuccessfully to two men, the board of trustees elected Rev. E. P. Palmer as president and financial agent in January, 1882 (disregarding the advice of Dr. Boude). By June of 1884, Palmer had tendered his resignation, which the board refused, though they did relieve him of the duty of financial agent. The trustees’ chief concern was "meeting the present liabilities for salaries." At no time since coming to Sherman had they been able to meet operating expenses.

In October, the board of trustees accepted Palmer’s resignation effective January 1, 1885, and elected the Reverend Donald MacGregor of Houston to succeed him as president of Austin College. MacGregor, a successful businessman turned clergyman, exhausted himself physically and financially in the effort to reduce the college’s bonded debt.

Since the meeting of Trustees in 1885, my time has been entirely taken up with the effort to compromise the bonded debt, which was initiated at that meeting. The offer then made of the land in Brazoria Co. to the trustees for the bondholders was after some correspondence between them, thrown into my hands, because of some harsh comments between them. The correspondence since then has been entirely with me, & has not been small or free from acrimony . . . I think we are coming

in sight of the end of the bonded debt, & if it is accomplished, we have great cause of thankfulness to the Great Head of the church. . . . The work I have had on hand has been laborious as well as protracted, requiring much mental strain, as well as physical labor, & under it I had last summer a complete breakdown, which at the time, I feared had ended all my work. I am now compelled to take rest & recreation, & by not only the advice, but almost order, of my physician, I take a sea voyage . . . In view of this, & that you may be free to place an active man in the field to raise endowments, & to complete the work that has been carried so far toward a conclusion, I place my resignation in your hands to take effect at the present meeting.